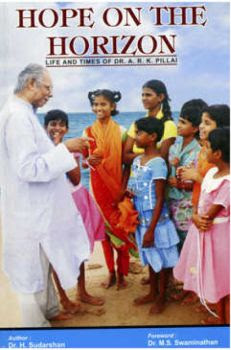 This book on the life and times of A.R.K. Pillai, founder of the Indian Leprosy Foundation (ILEF) — since rechristened Indian Development Foundation — is verily a slice of the community initiative in the country's fight against leprosy.

Kerala-born Pillai moved to Mumbai, where after a stint in the Railways and in an advertising agency, he took up the cause of leprosy eradication with a missionary zeal. He started off playing a PR role for the projects of German and Swiss organisations in India and then, in 1984, founded the ILEF.

To quote the author, H. Sudarshan, ILEF's concept of remaining a “catalyst with spirited advocacy for change in societal attitude” earned wide accolades for Pillai.

The book is in a question- answer format, with Pillai responding to the queries posed to him on a wide range of subjects — personal life, the challenges he faced in his campaign against leprosy, the task ahead etc.

Eminent agricultural scientist, Dr. M.S. Swaminathan says (in the foreword) Pillai has shown how a “person by setting himself as a selfless example” can motivate several others and lead them into the “national mainstream” (of dedicated social service).

Confirm on email - idfhopeonthehorizon@gmail.com - Send complete address for sending the copy by courier.

By buying a copy of Hope on the Horizon, you are sponsoring a child in IDF Bal Gurukul for a month - It's just Rs.400/=. WHY POSTPONE GOODNESS IN LIFE ? WHAT IS POSSIBLE TODAY MAY NOT BE POSSIBLE LATER !!