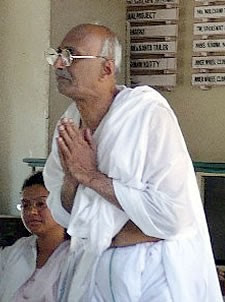 30th Jan - the Martyrdom of Mahatma Gandhi was observed as International Anti-leprosy Day.

Two newsitems on the Anti-leprosy Day event which appeared are as given below.
The link is also given for your easy access.

1. Towards the cherished dream of Mahatma - This report appeared in Mangalorean.com, the news Portal from Chicago, USA. Click on the link to reach the news. http://www.mangalorean.com/news.php?newstype=broadcast&broadcastid=65634 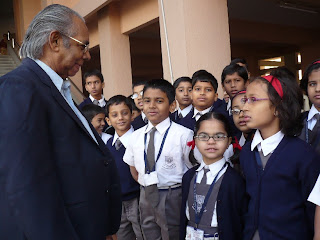 Airoli based New Horizon Public School and the recipient of Mother Teresa Memorial Award 2006-07 for social work have rededicated their service and resolved to support IDF this year too. The students have come forward to participate in the social programmes of IDF in the national interest.

IDF is a national NGO committed to health, education and rural development. Leprosy elimination in India has been possible, thanks to the student community who have relentlessly participated in the national programme, said Dr.Pillai. Starting from 30th Jan., the martydom of Mahatma Gandhi to 5th Feb., we will be observing world anti-leprosy week, he said. More awareness programmes will be organised to enlist people's participation in a massive level, Dr. Pillai asserted. 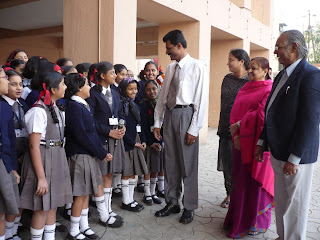 The Regional Head of the School Mr. Nicholas Correa, the Principal Mrs. Bulbul Sengupta and the Vice-Principal Mrs. Jyoti Nair exhorted their students to continue voluntary participation in the humanitarian programmes.

The national co-ordinator of IDF Dr. Narayan B. Iyer addressed on the community participation in leprosy elimination and the role of students in the national campaign.
Posted by INDIAN DEVELOPMENT FOUNDATION at Monday, January 28, 2008 No comments: 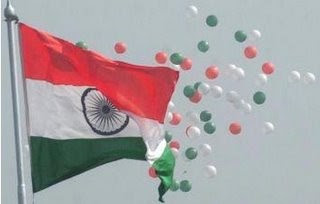 IDF wishes you all
A Happy Republic Day
JAI HIND !
Posted by INDIAN DEVELOPMENT FOUNDATION at Friday, January 25, 2008 No comments:

The Times of India, Bangalore edition on 16th Jan.08 reported on IDF's Social Ambassador - Karan Dravid. Our thanks to the Times Group for their kind and continued support. The complete report is given below.

BANGALORE: Tribal children at the Empowerment School in BR Hills have reason to be excited. Thanks to 8-year-old Karan Dravid, these children will now enter the world of computers.

The wonder-kid, who has been teaching these children English, will take on the role of a computer instructor as well. Karan's dream of teaching computers to these underprivileged kids has been realized, with HP agreeing to sponsor 30 computers through the Sankya project of Rotary Club, Bangalore South.

Karan, who is the ambassador for a Mumbai-based NGO, Indian Development Foundation (IDF), appealed for donations to private schools through a recent article in The Times of India.

Soon after, individuals from various quarters sent a flurry of e-mails promising to donate a machine or two. Karan has received four computers. He intends to donate these to IDF Empowerment Schools. "I am excited at the response I have been getting from people and companies. All these uncles are so nice. They want to help poor children," Karan remarked.

With Karan leading a campaign to provide computer education to tribal children, IDF has aptly called the project ‘Karan Programme 2k8'. Under the project, computers will be distributed to schools funded by IDF all over the country, according to IDF national coordinator Narayan B Iyer.

"It is a great effort by a small child to convince people to support a noble cause. Karan is a role model for the young kids who are, at their age, unaware of things like poverty or hunger," Narayan remarked. He said the Rotary club has delivered 17 computers, which will be distributed to 13 schools in Karnataka. Efforts are on to woo other corporates so that computers can be donated to schools outside the state, he added.

Karan, a Class III student of MEG Central School, was recently invited to Podar International School in Mumbai and Tagore International School, Jaipur, as their guest of honour on their Annual Day functions. He also spoke to students of Mumbai Law College of his dream to wipe out poverty. 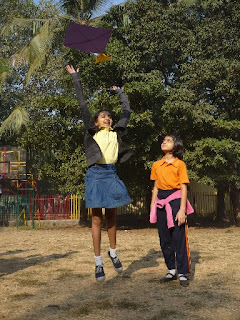 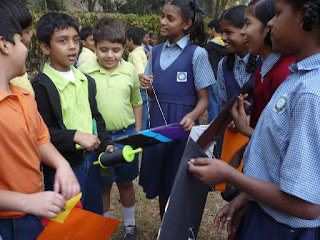 Indian Development Foundation, a national NGO organised a get-together programme of the Podar students and St. Catherine's students where they mixed with each other and distributed colourful kites made by them. Most of the kites were made of recycled papers or newspapers in order to save environment.

The CAS Co-ordinator of Podar International School Ms. Sarala Gavane led a group of 100 students from standard 3rd and 4th to St. Catherine's School in the morning hours of Monday where she explained the importance of Makar Sankranth to the students gathered and also conveyed the m 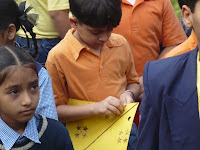 essage of love and brotherhood.

The national co-ordinator of IDF Dr. Narayan Iyer talked to the students and congratulated Podarites for coming forward and participating in such a meaningful exchange programme. Every school should have such kind of exchange programme where the students mixes with others and share the joy of participation. It's festival time to celebrate the winter solstice and the change of direction which is nothing but changing from the darkness of delusion towards knowledge, light and wisdom, said Dr. Iyer

The visiting students presented beautifully made colourful kites to the St. Catherine's Scho 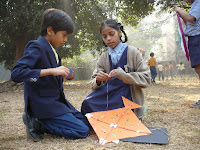 ol children. Every child took keen interest in the exchange programme and shared personal information. It was all a fun to see the colourful sight in the St.Catherine's garden. Students teaching each other the method of tieing strings to the kites and the tips to fly kites high in the sky. Some kites had snake like tail and fish like body, while some looked like hearts. It's really fun to fly kites and also share love with the Catherine's children, said Stuti a student from Podar School. 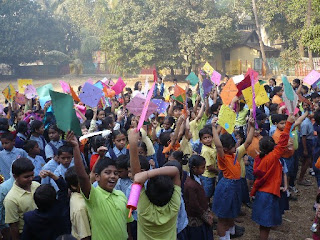 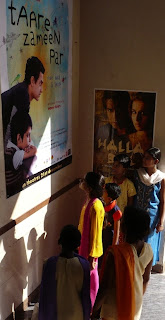 
Students from SIES College of Management, Nerul, Navi Mumbai and Indian Development Foundation (IDF) took the children of Vimala Dermatological Centre for the most inspirational and encouraging movie, Taare Zameen Par at the Sun City Theatre in Vile Parle on Sunday the 13th January. My friends in the college volunteered to sponsor the event and i thought what could be more satisfying then to take the Vimala Centre children for such a motivating movie, said Hari Thampy, a student from the SIES College. It is a Makarshankran 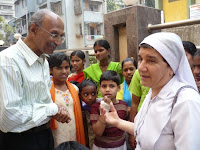 th gift from the SIESCOMS and IDF to the Vimala Centre children, said Shreya Shetty and Rushabh Vora from the SIES college.

A group of 53 children and Sisters from Vimala Dermatological Centre, a home in North Mumbai catering to leprosy, TB and eye care, had the privilege of visiting a theatre for the first time in life and seeing the latest movie of Aamir Khan, Taare Zameen Par. All our children are very fortunate to visit a theatre for the first time and that too to see a movie which every teacher, parent and student must see, said Sr. Lucia who led the group. Tears rolled through th 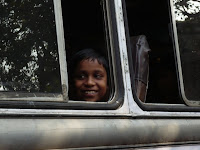 e eyes to see the role of Eshan played by Darsheel. A girl of 4 years from the centre said i could not control myself and cried seeing the most touching scene. I love the child artiste and also the drawing teacher's role, said Vidya from Vimala Centre.

Sr. Sisily, Sr. Shalini, Sr. Mary and Sr. Lucia accompanied the children from the Centre who thanked SIESCOMS students and IDF for organising such a wonderful moment in their lives. Really they made our children special, expressed the 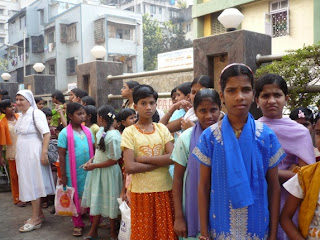 visiting Sisters from the Centre.

The Founder President of Indian Development Foundation, Dr. A.R.K. Pillai said it gives immense pleasure to take the underprivileged children to show such moving movies. Every child is really special and the children of Vimala Centre are too the `Taare' on this earth. It is duty of every citizen to come forward to support such children for their betterment and welfare, Dr. Pillai expressed with a smile as he visits a theatre after a long gap of 30 years.

Indian Development Foundation (formerly Indian Leprosy Foundation) is a leading national NGO committe to health, education and rural development which has its head office in Goregaon West. IDF Ambassadors and Volunteers made all arrangements in organising the event in a most success 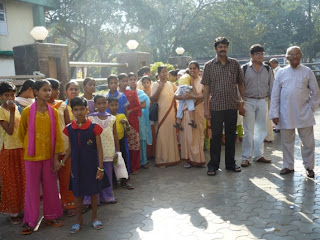 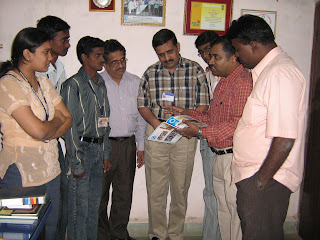 Mumbai University National Service Scheme (NSS) students from Vivek College of Commerce, Goregaon (West), Mumbai had taken up IDF activities as one of their project during 2007-08.

Expressing special thanks to the NSS Unit of Vivek College, Dr. Narayan B. Iyer, National Co-ordinator, IDF presented a Certificate of Appreciation to the College and mementoes to the students. Talking to a group of volunteers on Wednesday the 9th Jan., Dr. Narayan said students' participation in social work is indeed commendable and the amount of shramdaan the NSS volunteers contribute is really appreciative. NSS volunteers visiting villages and helping in bridging the rural-urban divide is a welcome thought, Dr. Narayan said. 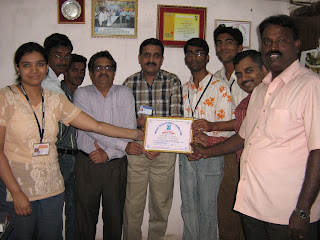 NSS Co-ordinator Prof. P. Thangadurai led the volunteers to several social projects and motivated them to do shramdaan. NSS volunteers performed extremely well in their social activities, apprised Prof. Thangadurai. Visiting leprosy home, talking to the patients, organising sale of greeting cards, mobilising resources from general public, participating in the World AIDS Rally and a host of other social service activities were performed by the students during the year 2007, he stated.

The Principal of Vivek College of Commerce, Mr. Sunil Mantri congratulated Prof. Thangadurai and all the NSS volunteers for their excellent performance and assured of continued support to IDF in the days to come. Our college NSS unit mobilised 240 units of blood during the recently organised blood donation camp, stressed Principal Mantri. We have plans to inculcate social responsibility among the non-NSS students too, said Mr. Mantri.
Posted by INDIAN DEVELOPMENT FOUNDATION at Wednesday, January 09, 2008 1 comment:

IDF in collaboration with SIESCOMS and a couple of Colleges and team in Mumbai had celebrated NEW YEAR with the leprosy inmates.

Media has given wide coverage of the event. Our sincere thanks to the media for their kind and continued support.

1. A Chicago based News Portal - Mangalorean.com gave a good coverage with photograhs.


2. DNA Newspaper from Mumbai has also given necessary coverage.

With all good wishes and best of life for 2008,

MAY ALL YOUR DREAMS IN YOUR EYES,
DESIRES IN YOUR HEART AND
HOPES IN YOUR LIFE BLEND TOGETHER
TO PROMISE BLISSFUL PATH OF
GLORY AND SUCCESS IN VIBRANT 2008.
HAPPY NEW YEAR 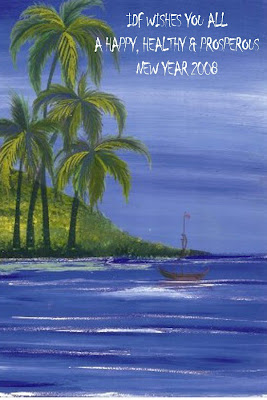