The first group of Clean Champions team from My Malwani Mast Malwani were addressed by the IDF team Dr.ARK Pillai, Rtn. Aunali Rupani, Prof. Prajesh Trotsky, Dr. Narayan Iyer at Bharat Mata School, Malwani, Mumbai on 28-02-2012. The Clean Champions were explained on their task and responsibilities and methodology to create awareness at various levels. Every Clean Champion (11 Girls and 9 Boys from each school) expressed happiness and promised for due diligence of their duties. Principals Mr. Feroz Shaikh, Mr. Sujith Rajan, Mr. Mohd. Rafiq Shaikh, Mr. Anis Siddiqui and all teachers from respective schools were present to get the motivation from the visiting team.
Click here fir the link to the complete Album
Posted by IDF NILESH at Wednesday, February 29, 2012 No comments:

A satisfying visit to IDF's Prarambh Bal Gurukul in Bhatta Basti, Shastri Nagar, Jaipur. The children in Prarambh Bal Gurukul are performing very well and aspiring for excellence in life. IDF Social Ambassadors from Arya Institute of Engineering and Technology - Aryaman and Sweta have come forward to teach the children using technology. Dr.Narayan B. Iyer and Kovid Oli from IDF congratulated all the students, teachers and Mr.Sandeep Edwin of Prarambh Foundation.
Posted by IDF NILESH at Sunday, February 26, 2012 No comments:

Karnataka State TB Association and Indian Development Foundation organised street plays to spread the message on TB to the common people. A number of awareness programmes are scheduled during the Anti TB Week - 17-23 Feb. 2012. IDF is committed to stop TB.
Posted by IDF NILESH at Wednesday, February 22, 2012 No comments:

IDF organised iDiscover programme - a visit to Nehru Planetarium - for the students of The Bombay Institution for Deaf and Mutes, Mazagaon, Mumbai. IDF has been organising iDiscover programme for all the Bal Gurukuls and associate school projects in India, inculcating scientific temper in young minds. Capt. Shankar Bala is the architect of iDiscover program.
Posted by IDF NILESH at Wednesday, February 22, 2012 No comments:

This is my story ....Dr.ARK Pillai at TEDx BITS Goa - Hope on the Horizon

Dr. A.R.K.Pillai, founder President of Indian Development Foundation (formerly Indian Leprosy Foundation) speaking at the TEDx BITS Goa on 12-02-2012. His opening remark `16 more to go to hit a century, i am 84 standing before you as a contended man and a happy man' received thunderous applause.
Posted by INDIAN DEVELOPMENT FOUNDATION at Thursday, February 16, 2012 No comments:

IDF team comprising - Dr. Pillai, Dr. Narayan and Mr. C.A.Mathew - met Sr. Carmen and Sr. Mabel and appreciated the wonderful work carried out by them. IDF team announced iDiscover project for the students which will include a visit to Science Centre Goa.
IDF brings smiles on many lives.
Posted by IDF NILESH at Wednesday, February 15, 2012 No comments:

Email ThisBlogThis!Share to TwitterShare to FacebookShare to Pinterest
Labels: iDiscover 2012 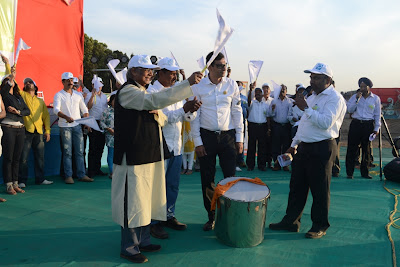 Gandhian and leprosy crusader Pillai felt happy launching the nation-wide clean movement and exhorted the citizens of the country to observe and promote cleanliness habits wherever they are. `My Malwani Mast Malwani’ launched at Asia’s second biggest slum is the first phase of clean movement.

has developed in many ways and that too notably, but the mindset of average citizen in the matter of cleanliness is lamentably not geared up properly. It is unclean everywhere and there is no perceptible sensibility to adopt steps to a clean environment. ranks too low among the developing and developed nations in the ‘Cleanliness Level’ scale. Such a national movement on cleanliness is the need of the hour, expressed Dr. Pillai, founder President of Indian Development Foundation while flagging off the movement.

can no more afford to be called a country of dirt and squalor, we all must come together for a "Clean-India" status. Though it is a massive effort, there is a need to take necessary steps on war footing to provide a clean environment for a healthy living and it is time to do something concrete that gives our country a clean environment. Every student, teacher, parent, worker and in fact everyone should observe and promote cleanliness as a way of life. This will certainly reduce the incidence of many disease including communicable diseases. These national agenda were echoed by Rotarian Lata Subraidu, District Governor Elect 3140, Prabhu Radha Krishna Das from ISKCON, Lion Simson, Principal, , Feroz Shaikh, Chairman My Malwani Mast Malwani and many educationists and celebrities who were gathered at the event.

Indian Development Foundation (a national NGO), with the help of other like minded NGOs, is spearheading a comprehensive clean-up programme to be rolled out on a nationwide basis over a period of time. For the first pilot, IDF is targeting the second largest slum in – Malwani (Mumbai). Post the success of the pilot, similar programmes will be replicated in other parts of . The CLEAN MOVEMENT-Malwani was launched on 8th February 2012 at 4:00 PM at Mhada Ground, Malwani, Malad (W), Mumbai.

Awareness campaigns/ skits/ street plays/ essay writing/ drawing competition and projects like induction of Student Clean Champions was adopted to bring focus on benefits of sustainable cleanliness to the slum communities. Over 50 street plays on Clean India Theme were played by NSS, NCC and volunteers from Usodeum Performing Arts.

Over ten thousand volunteers, residents and school students thronged to the ground to commit their support for the national movement.

We are confident of getting positive support for this national movement from every corner. Once we get success in this programme, we will be replicating the model in different parts of , said Rotarian Aunali Rupani, Dr. Narayan B. Iyer and Wg. Cdr. S. Balasubramanian.

Indian Idol fame Mohit Lalwani kept the entire crowd in good move with his musical numbers. The students cheered up the national movement and pledged all support for making a clean place. 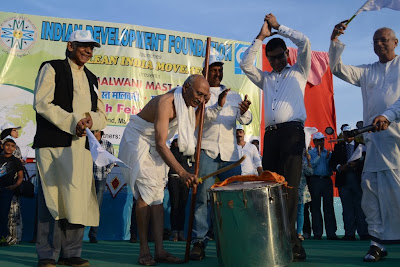 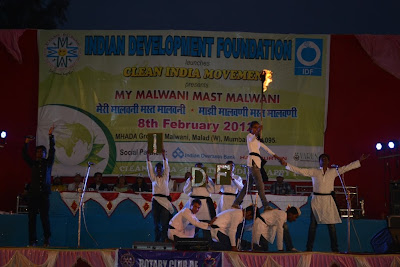 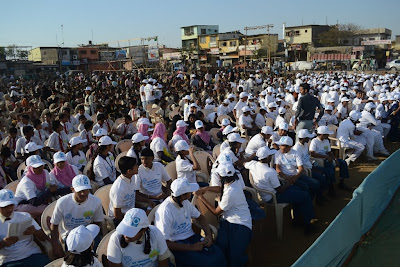 IDF launched its 70th Bal Gurukul at Hyderabad. CSS-NAM Bal Gurukul was launched on 8th February 2012 by IDF Social Ambassador Mr.Sanjaay Ramm. The Bal Gurukul is run in collaboration with CSS-NAM School, Hayat Nagar, Hyderabad. The School committee members Mrs.Janaki, Mrs.Prameela, Mr.Paul, Mrs.Indira along with the Principal, Staff and the students were present for the event. Ms. Manaswi, daughter of Mr.Sanjaay Ramm entertained the students by performing dance. The school children presented a beautiful cultural programme and some skits. Parents and wife of Mr.Sanjaay Ramm too graced the event and congratulated the students for getting IDF Bal Gurukul.
— in Hyderabad, Andhra Pradesh.
Posted by IDF NILESH at Wednesday, February 08, 2012 No comments: 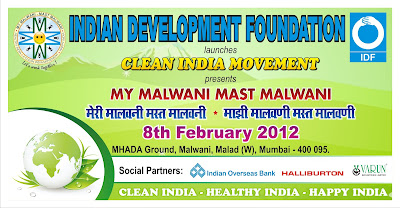 IDF launches "Clean India" Movement from Malwani today at 4.00 pm. "Clean India" action will be replicated in cities, towns, villages and rural areas with the launch of this Mega Event today. Start "Clean India" in your own area, India must be clean !Cleanliness is next only to godliness! Promote cleanliness! Make Cleanliness a habit, we have everything to gain, nothing to lose!Why postpone goodness in life? IDF in India's life and every part of it !
Posted by INDIAN DEVELOPMENT FOUNDATION at Wednesday, February 08, 2012 No comments:

Shri M. Narendra, Chairman and Managing Director, Indian Overseas Bank is flanked by Dr. ARK Pillai and Dr. Narayan Iyer at the IOB Central Office, Chennai. Shri NarendraJi congratulated IDF for its yeomen service to the nation. He also wished IDF team all success for the launch of Clean India Movement.
Posted by IDF NILESH at Monday, February 06, 2012 No comments:

IDF Neela Saraswathi Bal Gurukul at Chennai.
Salutations to IDF Social Ambassador Mrs.Kamakshi Sivafor managing the Bal Gurukul and teaching English to the kids......The cute kids in the pics are from the music class run by Mrs.Kamakshi Ji.........Dr.ARK Pillai, Mr. Sreeram, Mr. Sathya and i had the opportunity of visiting Neela Saraswathi Bal Gurukul on 06-02-2012 at Chennai. Mrs. Vijayalaxmi Sheshasayee is also a great supporter of IDF.