Greetings and good wishes for a Happy, Healthy and Prosperous New Year !

Indian Development Foundation (formerly Indian Leprosy Foundation) will be organising a Citizen's Reach-out Programme on 29th December 2007 (Saturday) at 4:30 PM at Vimala Dermatological Centre, Versova, Yari Road, Andheri (W), Mumbai 400 061. We cordially invite you and family to participate in this public event and share the joy of happiness.

Every year we conduct New Year celebrations with leprosy patients and children of Vimala Centre, distribute gifts, eats and items of daily use. Such Citizens' Reach-out programme has gained momentum over twenty five years now. Citizens from different walks of life will gather at the centre to greet the inmates and children during the festive occasion.

Leprosy patients on this occasion get the happy feeling that there are kind-hearted citizens who consider them as part of society and care for their welfare. The citizens-patients interaction during festive occasion has gained year after year.

Please take advantage of this opportunity to help those who are in dire need and who deserve your kind words, help and sympathy.

We would request you and friends to participate in the event and share the joy of participation.

With kind regards and good wishes,

PS : Donations in cash/kind may be sent directly to the Foundation for organising the event.

Greetings and good wishes from IDF !

Hope you have seen our email with regard to IDF Greeting Cards. Send a card, Serve a child. Click the link given below and you will get all the details.

Time is very short and we can help you reach your near and dear ones directly. Just send your friends and contacts addresses to us, we will send your Greeting Cards instantly.

For people in India - Rs.15/- per card including postage. Minimum order 50 cards. More is always welcome.

For people outside India - $1 per card including postage in India - Minimum 25 cards. More is always welcome.

Save time and start placing your orders. You send your friends addresses and the rest will be taken care.

Please send Complete Address of your friends at idfmumbai@gmail.com OR idfark@gmail.com

You can also place orders for packets which will be sent to you directly. The option is yours.

EVERY CARD THAT YOU PLACE THE ORDER, WILL HELP THE POOR AND THE UNDERPRIVILEGED CHILDREN.

WHY POSTPONE GOODNESS IN LIFE ? WHAT IS POSSIBLE TODAY MAY NOT BE POSSIBLE LATER. ACT NOW and FEEL THE DIFFERENCE.

With all good wishes and waiting for your favourable response,

Send a card, Serve a child 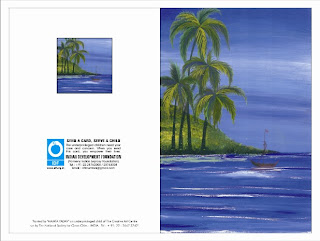 Season's Greetings to you all !

Festive season is around the corner and we are certainly happy to celebrate it with great joy.

While we celebrate the festive season, let's remember the poor and the deprived sections of our society who do not have adequate access for enjoying the festivities. There are several children under IDF care who need your care and attention for their health and education. It is our tradition to share what we have with the underprivileged in the society, isn't it ? Why not share your mite for some noble cause now. Here is a way to participate and share the joy of happiness. 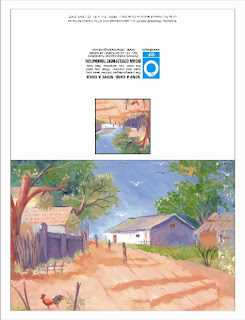 In this e-world, Greeting people through sms, emails etc. have become a fashion. BE DIFFERENT, MAKE AN IMPACT. Greet your near and dear ones with an IDF Greeting Card. Send an IDF Card today and feel the difference.

IDF has brought out 4 special designs of Greeting Cards. These cards are specially designed by the underprivileged of the Creative Centre for Arts run by the National Society for Clean Cities - India.

Feel free to see the specimen of Greeting Cards attached with this mail. You will be surprised to see the beautiful paintings made by the underprivileged children. (Size of the card 5X7 inches folded) (Fine Quality Printing - 300 gms Art Card)

We have made it easier for the friends to buy cards - since the cards are in a packet. A single pack contains 12 Cards - 3 cards each of 4 designs and 12 envelopes too. Each card costs Rs.10/=, thus the packet price comes to Rs.120/=. IDF gives a special offer during this festive season by making it available for JUST Rs.100/=. Grab this offer and help the poor and the needy. This is the golden opportunity to serve people at large. 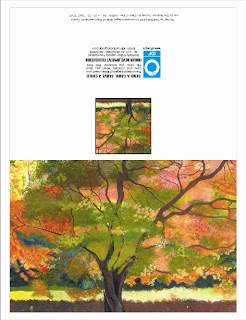 Courier charges as per actuals will be charged extra

By buying IDF Cards you will help in making the future of India. The underprivileged children need your care and concern. Send IDF cards and empower their lives.

With all good wishes, 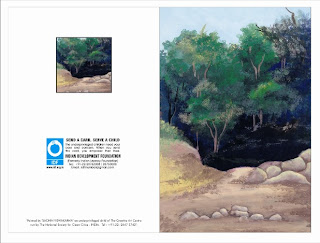 Posted by INDIAN DEVELOPMENT FOUNDATION at Monday, December 10, 2007 No comments:

An ideal way to fulfillment !
IDF invite you to become an Ambassador in your area and promote the social work for humanitarian benefit.
For details contact IDF @ idfmumbai@gmail.com OR idfark@gmail.com

We will be updating the details shortly.

Posted by INDIAN DEVELOPMENT FOUNDATION at Friday, December 07, 2007 No comments: 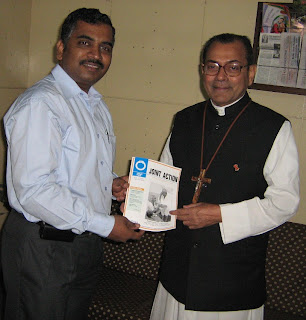 Dr. Narayan apprised the Archbishop on the activities of IDF in national level.

Dr. Narayan presented IDF publications to the Archbishop who later conveyed his blessings and good wishes.

A noted website serving the Mangaloreans around the world, hosted from Chicago, has always been highlighting IDF work in national interest. The recently organised World AIDS Day 2007 on 1st Dec. 07 has been highlighted in their portal in public interest. 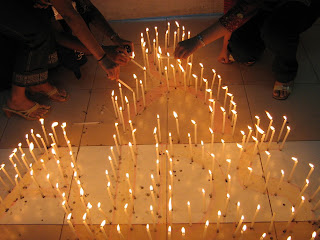 300 Students from class XI onwards formed the major audience who received the vital information on HIV/AIDS.

Though the numbers of HIV cases are coming down in India , still we need to have concern for those affected with this dreaded disease and die out of it. We can STOP HIV/ AIDS only through proper awareness and education. World AIDS Day gives us an opportunity to take part in the massive campaign and spread the message, said Rev. Sr. Bertilla Capra. 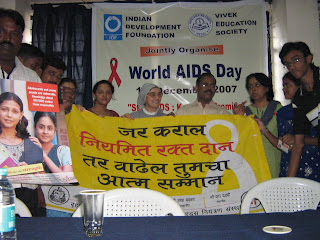 Rev. Sr. Bertilla Capra, Director of Vimala Dermatological Centre and Chief Guest for the programme stressed on faith, love and joy. Youth in this country should know the importance of life and help to build a healthy society, stressed Sr. Bertilla. 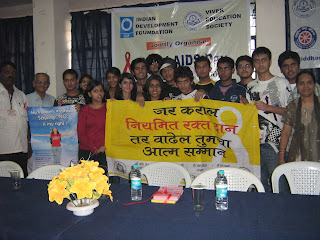 and Asif. Every student stressed on massive dissemination of information, education and communication on the subject to stop the spread of the disease. Community participation and love for the children affected with HIV were also some of the points the students touched upon. 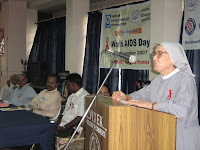 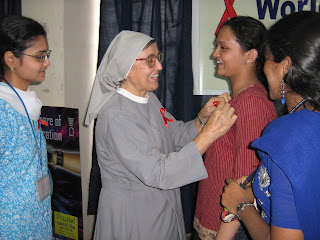 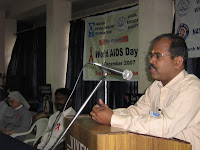 Red Ribbons were distributed to all the participating students while pamphlets on HIV/AIDS were exchanged for more knowledge. Students and dignitaries joined in lighting candle to mark the World AIDS Day and pledging to fight against the disease. 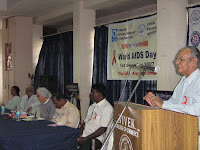 Stop AIDS, Keep the Promise was the slogan raised by the students as they lighted the candles. 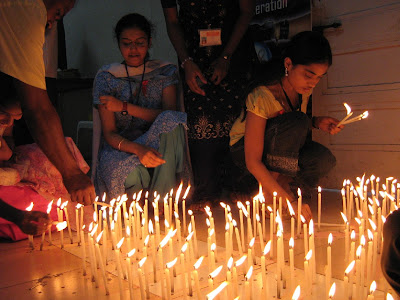 Posted by INDIAN DEVELOPMENT FOUNDATION at Saturday, December 01, 2007 No comments: